Get 40% off by reserving your spot.
Learning Faster

8 Lessons From Navy SEALs on How to Be Tough

They are the special warfare combatants of the United States.

Some might think there are many (especially due to so many movies we see about them) but in reality, there are only 2000 of them. Only 25% of those who enter training, graduate.

Let’s uncover the 8 lessons we can learn from Navy SEALs on how to be tough.

Naval Admiral William McRaven spoke at a graduation commencement at the University of Texas in 2014 and one of the many things he talked about was how every morning, the first thing instructors would do was check their bed’s to make sure they were made to perfection. Also, several times a week during their training, the instructors would do a random uniform inspection. It was expected of them to keep their belts finely polished, their uniforms pressed and hats, perfectly starched.

However, no matter how much effort one spent in getting these three things perfect, the instructors would always find something wrong and some would always fail the inspection. Consequences?

Think toughness is all about size? Add character, habits and mindset to the list.

There’s a reason these men are considered the toughest and most courageous. They undergo something called mental conditioning. The concept is actually pretty simple to understand. Remember when you told your parents you did not want to swim because you were scared of drowning? Well, your dad still put you on spot (in this case, the pool), didn’t he? No matter how much you hated it, you learned how to swim.

Psychologists call this habituation. The more you’re exposed to something you fear, the more you become immune to it since you get used to it. Many studies from top institutions such as Harvard, Columbia and University of California at Irvine are starting to solve the mystery of primal and remembered fear. Initially, it was known that once an animal “learns” to be afraid of something, the memory doesn’t vanish.

However, researchers from the University of Puerto Rico school of medicine discovered that these memories + emotions that come along with it  can actually be replaced by forming new memories. The new memories in this case being repeating an action over and over again so in a way you’re relearning the bad memory you previously had (your fear).

In SEAL training, there is a bell in the centre of the compound for everyone to see. What this bell does is, gives an opportunity to anyone to quit. All one has to do is ring the bell and they wouldn’t have to wake up at 5 in the morning everyday or go through freezing cold swims. So what does one do when every hour of the day is designed specifically to harass you mentally and physically? You set short term goals.

Neuroscientists have studied the SEALs and found that the ones who graduate are the ones who set short term goals. Now, when I say short term, I mean really short term ones. For instance, successful graduates don’t spend a lot of energy on what they’re going to do after breakfast while they’re still having breakfast for instance. So instead of dwelling and spending so much energy on whining about how much work is left to do, maybe we can learn to focus on one task at a time.

As the saying goes, “one day at a time, everyday.”

4. Failure? Shake it off

Each year about 1000 train to become SEALs but only 200-250 graduate. That tells us how competitive each and every day can be. In fact, instructors take special notice if someone is underperforming and make them “pay” for it. This involves two extra hours of calisthenics or what the SEALs call, “circus.”

Needless to say, no matter how hard they try, their name is going to go on the list and they will end up doing these two extra hours. What’s fascinating is that, over the years instructors have observed how people who frequently appear on the circus list end up graduating because these two extra hours gives them an additional opportunity to get stronger and better.

What do we normally do when failure knocks on our door? We give up. You will probably deny that right now but you know exactly what I mean. It’s easy to keep going without adversities but what distinguishes good and great is persistency. You fall down seven times, get up eight and try again, again and yet again. With each try, you learn from your failure and get better.  Yes it hurts and stings but hey, as my favorite motivational speaker Eric Thomas says:

“If it was easy everybody would do it.”

5: Willpower is the key

Naval Admiral William McRaven mentioned a heart touching anecdote about his training. As days went by, more and more men started quitting and the teams reduced day by day. There were about 6 boat crews with 7 men each and the one he was assigned to had men who weren’t particularly “big” in size. On an average they weren’t taller than 5”5. Also, each one of his boat crew members came from different walks of life: American Indians, American Italians, American Greeks and African Americans.

Now, just because these men weren’t “as big” as the rest, they were always laughed upon by their mates. However, these very men always seemed to have the last laugh cause they always outswam, out ran and out performed. What does that tell us? We are all equal and being tough doesn’t mean judging ourselves or anyone else by their ethnicity, color or even size for that matter. What really makes a difference however is how big your heart is, how much can you take? I used to do crossfit in the summer and my trainer once told me that what really makes that bicep bigger or that cut deeper is that extra push up, that extra mile and body doesn’t help you with that, your will power does.

Still wondering why you aren’t losing any weight?

The BUDS training instructors specifically plan and organize each and everyday to question your reason to be there. Yes there’s humiliation and they will know what your fears are so they can break you until you decide to look past them and come out stronger. As I mentioned before, the number of people decrease every single day. Let’s talk a little bit about the one’s who don’t quit, the ones who stay despite these mental barriers. 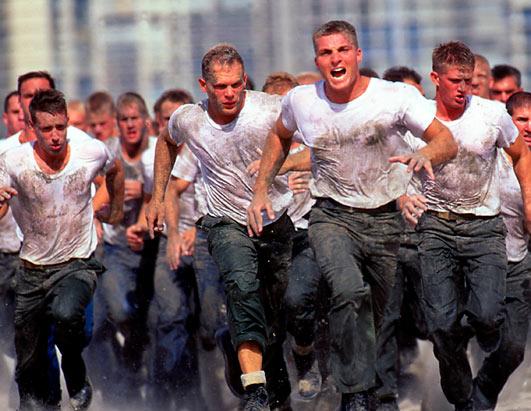 You see, the only reason they survive is because they don’t quit. In fact, in a TED talk given by former Navy SEAL Marcus Luttrell, he states what simply differentiates the SEALS from the ordinary. Quoting him, “one thing that runs in the SEAL team is our never quit attitude. It’s not that we’re better than everybody else. It’s just that you have to basically kill us if you want us to stop coming after you.”

Now, how do you not quit?

It’s actually pretty simple. You don’t quit something when you can’t imagine doing something else. Meaning, it’s your purpose, you were in a way, born to do this and only the ones who really want to be a SEAL, will make it through. Maybe we need to reconnect ourselves with our purpose and yes that means spending time (as much time as it takes) to find one if we aren’t aware of them. You see, once you find your purpose, you’ve already won half of the battle cause what’s going to make you great is perseverance after failure.

Why would you persevere? Simple. Because you’d be doing something you love.

There’s a saying that’s etched above the grinder in the BUDS training compound. It goes something like this: “ The only easy day was yesterday”. As the months progress, during the 3rd week of the first phase, Hell Week, a defining event of the BUDS training takes place. Basically, it involves five and a half days of cold, wet and brutally difficult operational training with as low as four hours of sleep.

It is considered to be the toughest training in the U.S military and only 25% make it through. These 25% realise they can do so much more than they ever imagined. Needless to say, each day gets tougher than the day before and the ones who really want to be Navy SEALS emerge out of it. Applying that to us, don’t we sometimes wish we had an easier day? maybe if we could sleep in? skip that class? How about instead we focus on giving everything we have every single day? What if, instead of feeling sorry for our lives, we put our chins up and give a hundred and twenty percent?

So if you want to learn how to be tough, learn to master each day with all you have. All of it.

Lieutenant Commander Mike H of the executive officer of Seal Team 10 stated “Today, our primary weapons systems are our people’s heads. You want to excel in all the physical areas, but the physical is just a prerequisite to be a SEAL. Mental weakness is what actually screens you out”.  You know how you wake up every morning and really want to go to the gym but the voice in your head just tells you not to? Now, some learn to listen to it while others ignore it.

These men have to learn how to master their minds and ignore the “bugs” inside. There’s a well known saying in MMA that every individual (either in the hexagon or any other fight) actually goes through two fights. The first one (considered the hardest) is the fight in their heads, that voice giving them reasons why they can’t do it, why they should probably be sleeping, making them wonder what their friends would be doing. Then there’s the actual engagement which is the easiest, considering you win the first fight.

Still think toughness is all about size?

It’s at that moment when you decide to do that extra push-up regardless of the voices inside telling you to give up. Now I know what you’re thinking. “Ignore it? How do I just ignore it?”

Well, there’s this technique in meditation called labelling. Here’s how it works. Let’s say you’re running and the bugs inside start talking. What you do is, accept these voices and label them. Once you understand that your thoughts and feelings don’t define you, that’s when you learn how to control it. Want to be tough? Going to the gym everyday isn’t the only answer. Learn how to exercise your mind as well- practice meditation. Once you learn how to control it, you can defy any odds.

There’s a Zen saying about the nature of mind, “Minds a beautiful servant but a dangerous master.”

How do you treat your mind? Do you master it or does it master you?

What were your biggest lessons on how to be tough?

10 Easy Ways to Learn English Quickly (Without Getting Bored!)

English is one of the most spoken languages of the world, and it’s hugely beneficial to learn. In fact, linguists …